ADAM SILVER HAS APPROACHED OTHER COMMISSIONERS ABOUT LEGALIZING SPORTS BETTING 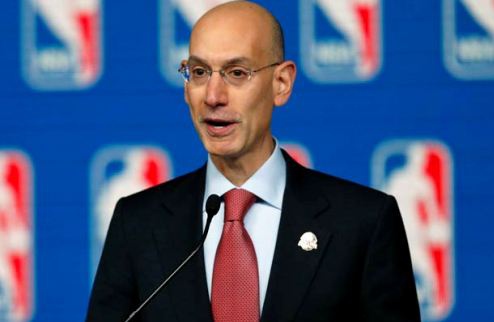 NBA commissioner Adam Silver said that he has spoken to other sports commissioners on the issue of legalization of sports betting in the US.

“I have talked to the commissioners in the other leagues about it, and I leave it to them to make any public statements they want to make on it. I will say that certainly all of them … have assigned people in their organizations to study the issue intensively,” he told ESPN.

Silver has just finished his first year as commissioner, during which time he has been an agent of change, from dealing with character flaws among team owners to looking at having NBA franchises in Europe and making changes in the format of draft lottery systems and playoffs.

Silver, so far, is also the only American sports commissioner to publicly express his support for sports betting. He wrote an op-ed in the New York Times in November that called on Congress to create a federal framework to allow states to authorize betting on professional sports. Silver says universal regulation is preferable to laws that vary from state to state-thereby justifying the NBA’s continued opposition to a New Jersey bill that would have legalized sports betting.

“It’s my personal view that there should be federal legislation on this issue, in part to avoid what is happening now,” Silver added. “My greatest concern is that there will be in essence a hodgepodge of regulations controlling sports betting that will vary from state to state, jurisdiction to jurisdiction and will make it increasingly difficult to monitor betting on our very own sport.”

This represents another progression in Silver’s approach to move sports gambling legalization beyond Nevada into the national conversation.